The government got its funding priorities wrong on river maintenance before last winter’s floods, say MPs.

Funding levels for maintenance remain “at a bare minimum” and more money must be found for dredging to avoid a repeat of the winter’s devastation, MPs said.

The government said many lessons had been learned and measures put in place.

The record levels of rain that fell on parts of England and Wales meant that the winter of 2013/14 was the wettest in over 200 years.

Around 7,000 properties were flooded, with parts of Somerset under water for three months.

MPs on the select committee commend the government for their efforts with the clear up, but they are critical of the actions that they say contributed to the problem in the first place.

Funding for the maintenance of rivers and other waterways had not been sufficient, they say.

“When budgets are tight, it is the first thing to be cut,” the MPs write.

The committee said they were concerned to hear from the Environment Agency that when the overall funding for maintenance went down from £170m in 2012/13 to £147m in 2013/14 “the bits that gets squeezed is conveyance work: that is, regular clearing, dredging and keeping rivers clear.”

Ministers need to reassess their priorities to “recognise the importance of regular and sustained maintenance work and put it on an equal footing with capital investment.” 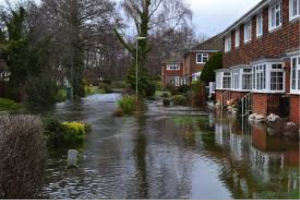 The Efra committee welcomed the extra funding that the government had provided, including £130m announced in February this year, and £140m announced in the budget. However there were concerns that a large proportion of the funding that has been referred to as “additional”, should have been more accurately described as “reallocated”.

There was now a greater need for extra money to keep pace with the increased risk of floods and to maintain the extra defences that are being built.

“We have repeatedly called on the government to increase revenue funding so that necessary dredging and watercourse maintenance can be carried out to minimise flood risk,” said Anne McIntosh, the chair of the committee.

“Yet funding for maintenance funding remains at a bare minimum.”

And Ms McIntosh told the BBC’s Today programme that MPs were proposing “one revolutionary change” to “end the current split of spending between capital expenditure and revenue and maintenance, and merge the budget into a total expenditure budget”.

“That would mean greater clarity and transparency for everybody concerned.”

Ministers want the Department for the Environment, Food and Rural Affairs (Defra) to give a “long term commitment” to fund regular maintenance.

Henry Cator, from the Association of Drainage Authorities, who gave evidence to the committee, also welcomed the extra money but he had doubts that lessons from the floods had been fully learned.

“I think the government have taken steps but I don’t think it is enough, and I don’t think yet there is an attitude in Treasury that says we must do this,” he said.

“They are looking on this as a luxury, as an add on. It is not, it’s an essential.”

Floods minister Dan Rogerson defended the government’s handling and said they were spending £3.2b over the course of this parliament on flood management and protection from coastal erosion, more than had ever been spent before.

Speaking on the Today programme he said that while maintenance was important, it wasn’t the only response.

“In some places it will be bigger capital schemes and bigger schemes that will make a difference so we have to look at the scientific evidence about what works in each catchment and make sure that we are spending the money to deliver the benefits of that £3.2b investment.”

“It is also a matter for landowners, so we have got pilots going across the country where we are encouraging them to do more as riparian landowners – and working with the internal drainage boards to use the resources and expertise they have, so it is a matter for a range of us, central government is important in that but local land managers will play a role too.”

Other experts were “disappointed” with the report’s focus on dredging, when they had advocated a range of approaches to slow down the flow of water.

“I don’t think it is as balanced as it could perhaps be,” said Alastair Chisholm from the Chartered Institute of Water and Environmental Management.

“Within the community that manages flood risk there has been travel in the direction of looking at a whole range of measures to tackle the problem.”

“It’s been moving in the right direction for years but this report really hasn’t taken that up and given it the backing it deserves.”

The report also calls for a review of the policy of prioritising urban areas over farm land.

“There is much greater value put on front rooms over fields. But it is the fields that flood the cities and towns because that is where the confluence of the river is,” said Mr Cator.

The committee says the government must ensure that front line flooding jobs at the Environment Agency are protected.

They also argue that that land owners must be encouraged to take action to repair and maintain water courses on their own properties.

The MPs urged the rapid completion of a series of seven pilot river maintenance schemes which give land owners greater freedom to clean up rivers.

“I’m delighted to see the pilots being endorsed but we need to accelerate the process – it’s not going quickly enough,” said Mr Cator.

Did you find apk for android? You can find new Free Android Games and apps.
0